Definition: Protracted bacterial bronchitis can be diagnosed if a child has a wet cough lasting more than four weeks without specific pointers to an alternative cause, and which responds to antibiotic therapy.

Protracted bacterial bronchitis (PBB) is highly prevalent in Aboriginal children and yet under recognised and under treated. Clinicians often don’t recognise that a wet sounding cough in a child for more than four weeks likely reflects a serious problem, even in the absence of any other clinical symptoms or signs such as vomiting or fever.

Australian research suggests a substantial proportion of children with chronic wet cough will have PBB. If left untreated, it can reduce quality of life and lead to permanent lung damage/bronchiectasis.

How is PBB diagnosed? If children are old enough to expectorate (typically after six or seven years of age), a sputum sample can be sent for microscopy and culture. The typical culprit in PBB is non-typeable Haemophilus influenzae. However, in younger children who are unable to expectorate sputum, a pragmatic approach is required.

Firstly, exclude conditions that are not PBB (i.e. asthma, recurrent milk aspiration, foreign body aspiration and tuberculosis).  Asthma causes chronic wet cough in approximately five per cent of cases, but is usually associated with recurrent episodes of wheeze and shortness of breath. Recurrent milk aspiration typically presents as coughing and/or choking with feeds from early infancy. Aspiration can be caused by dysphagia, laryngeal clefts or trachea-oesophageal fistulas. Think of foreign body aspiration in children if respiratory symptoms clearly started after a choking episode. Remember, parents are unlikely to volunteer information about a choking episode that occurred in the past unless specifically asked about it.

Physical examination is important. Normal examination does not rule out PBB.. Check weight and height to rule out failure to thrive. Look for digital clubbing that would suggest serious underlying disease. Chest asymmetry or asymmetrical breath sounds like crepitations can also indicate chronic disease, particularly if the asymmetry does not resolve.

Most children with chronic wet cough will not have any pointers to alternative causes. In these cases, the ‘Persistent Cough’ HealthPathway recommends two weeks of oral antibiotics followed by a check-up. If the chronic wet cough responds to oral antibiotics, the condition is most likely PBB. However, sometimes more than two weeks are required to fight infection that has become entrenched. If the child still has a chronic wet cough at their two week check-up, unless they have experienced unacceptable side-effects, they should be prescribed two more weeks of the same antibiotics followed by a check-up. In the rare instance that a child still has an ongoing wet cough after four weeks of antibiotics, they should be referred to a general or respiratory paediatrician. The specialist will revisit the history and examination and may want to rule out conditions such as cystic fibrosis, primary ciliary dyskinesia, immune deficiencies etc.

“I would not have thought to mention that she has a cough as she has had a cough since she was 11 months old.  In the morning she sounds like a smoker. But she has always had that”  –  Mother of seven year old with bronchiectasis.

Figure below based on Central Australian Rural Practitioners Association guidelines: 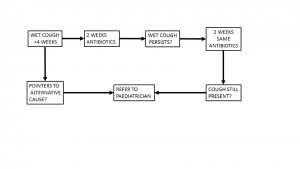 Data linkage could be key to better health

The Midwest tackles tough times, together