The team at WA Primary Health Alliance visited Beagle Bay, Ngumpan Community and Wangkatjungka community to the East Kimberley peninsula to inform them about My Health Record.

Sandra Ryder, My Health Record Community Engagement Officer, Rodney Carpio, Aboriginal Health Coordinator, had a yarn with Aboriginal Elders during their travels. They explained the benefits of My Health Record. Many community members struggle with chronic disease such as renal (kidney) failure and are required to travel to Broome or Perth for their health appointments.

Although the Elders are not ‘online’, they understood the concept of My Health Record and could see the benefit for their community. One of them said “If the doctor in Perth can view my details and I won’t have to repeat myself every time, that would be a good idea.” The Elders said they would to talk to their communities about what they perceive to be the benefits of the system. 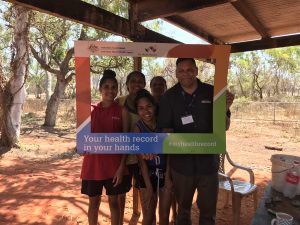 Sandra and Rodney travelled to Beagle Bay for a visit to the Aboriginal health clinic. They sat down with the locals and had a yarn about My Health Record. Beagle Bay is a remote area of the Kimberley and the community has around 285 members. People had limited to no knowledge about My Health Record and some wanted to find out more by talking to their doctors before making a decision.

She spoke with community members at the Kimberley Aboriginal Law and Culture Centre Festival and facilitated talks at the Annual General Meeting (AGM) of the Kimberley Land Council, the Kimberley Language Resource Centre and Aarnja where she engaged with over 100 people. 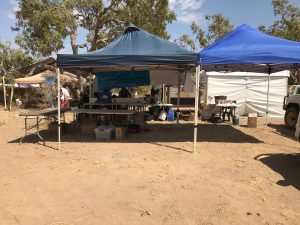 Last stop for Maxime was the Wangkatjungka community where she first spoke to the CEO who said he didn’t expect many people would want to opt out because the community has faith in their local clinic. Information materials specifically developed for the Aboriginal community were distributed at the clinic, the school, the campsite and the supermarket.

Looking back, Rodney summarised the week as follows: “The visits were well received, we had good support from CEOs of the four Aboriginal communities and from WA Country Health Services based in these communities.”

This trip formed the first phase of remote engagement within the Kimberley and further trips are planned to engage with other communities. The work began after detailed planning by our Kimberley office, led by Andy McGaw and Maxine Chi.

The work of WA Primary Health Alliance complements engagement activities being undertaken in other areas of the Kimberley by the Kimberley Aboriginal Medical Services.