Native wreaths lay on the banks of the Murray River, the band played, and healing smoke filled the air, uniting the Peel community on the 185-year anniversary of one of the most notorious incidents in Aboriginal history.

Bindjareb Boodja – Back to Pinjarra Day on 26 October 2019, paid respect to ancestors who have fallen, supported cultural awareness in the community, and assisted with the spiritual healing of the Bindjareb nation and first Australian’s, following the 1834 Pinjarra Massacre.

The day was community-led and guided by local Aboriginal people, and proudly supported by the Shire of Murray.

The WA Primary Health Alliance has funded the Shire of Murray as part of the Australian Government’s National Suicide Prevention Trial to deliver their Completing the Circle Project, which focuses on supporting the social and emotional wellbeing of local Aboriginal communities through initiatives such as Bindjareb Boodja – Back to Pinjarra Day.

“The objective of the Trial is to find the most effective approaches to suicide prevention for at-risk populations, and Aboriginal communities are a key part of that,” Ms. Merna said.

“We need to support healing and resilience in the area through cultural events and community level planning, as the community know what their greatest needs are.” 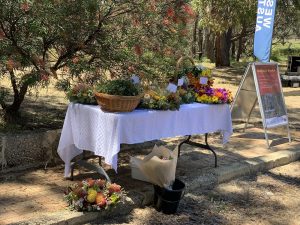 Wreaths at Back to Pinjarra Day

The event featured the laying of native flower wreaths, a smoking ceremony for healing, and a Welcome to Country by Harry Nannup.

There were a range of cultural activities with adults trying traditional food tasting and basket weaving, while children made dream catchers, boomerang scratch art and painted wooden native animals.

Music was also a highlight of the day with performances from the Lloyd Walley band and Didgeridoo competition entrants, with live broadcasts from 100.9fm Noongar Radio.

The inaugural commemoration event held in the 1990’s featured a performance by renowned Aboriginal dance troupe the Bindjareb Middars. Having since performed all over the world, original troupe members and their descendants returned to co-organise the 2019 Binjdareb Boodja – Back to Pinjarra Day event, giving cultural guidance and knowledge.

Shire of Murray Chief Executive Officer Dean Unsworth, said the annual Bindjareb Boodja – Back to Pinjarra Day was important for the Pinjarra area.

“The Shire of Murray acknowledges that Australia has one of the oldest, richest, continuing cultures in the world and appreciates the importance of events such as the Back to Pinjarra Commemoration,” Mr. Unsworth said.

Bindjareb Boodja – Back to Pinjarra Day was proudly supported by Tourism Western Australia, 100.9fm Noongar Radio, the Shire of Murray and the WA Primary Health Alliance as part of the Australian Government’s National Suicide Prevention Trial.

To learn more about the National Suicide Prevention Trial, and activities in the Peel region, visit our website.

A blueprint for mental health

Better Health, Together: Building capacity and capability within general practice